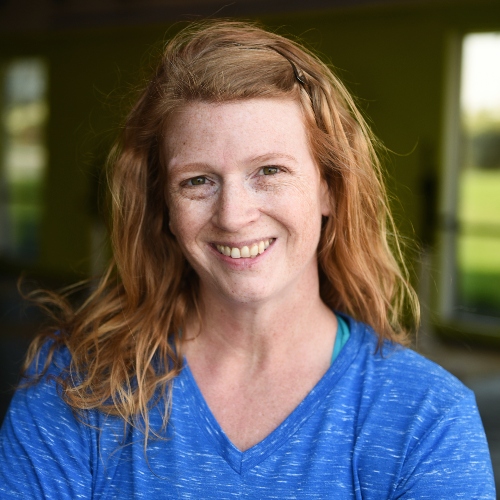 I love to swim and have been swimming since I can remember. When I was in high school I was, of course, on the swim team. In college, I wasn't on a team, but I would walk or bike across campus to go swim in the "good" pool. After I had my two kids, I thought it would be a great idea to start up swimming again. Because I love a challenge, I thought the best way to do that was by doing a triathlon. We lived in California at the time, so that meant my first triathlon was swimming in the ocean. After completing my first tri-, I was hooked. Even though I was completely dehydrated and whipped by the ocean, I vowed I would do it again and perform better the next year! And I did! I bought a better bike. I read more about race nutrition and I listened to my coach on how to make my swim stroke more efficient. I still sucked on the run, but two out of three ain't bad.

In 2006, my husband, kids and I moved from California to Michigan to be closer to our families (aka free babysitting) and where training for triathlons proved to be a bit of a challenge. Stupid winter. On our first New Year's Eve back in Michigan, a friend from college talked me into doing the Bayshore Marathon with her. The next morning, I woke up and signed up for the HALF Marathon. I was desperate for an exercise plan, and somehow going from hating running to a half marathon seemed like my only option. Sadly, that option included doing 90 percent of my training on a treadmill in my basement! The good news is I ran that half marathon...and I didn't hate it as much as I thought I would. In fact, I signed up and did it again. This time I had a running buddy, Melissa, that made me wake up at 5 am and run with her. On one of those runs, she told me about...CrossFit and Functional Fitness. What a wonderful world full of functional movements and best of all - variety! No longer was I just running, but now I was jumping on boxes, doing the magical move called a burpee, and best of all...cleaning, jerking, and snatching, not just with barbells and dumbbells, but also with kettlebells. Yup, I was hooked.

Although working out to stay in shape and get stronger are huge motivating factors for me, I am most motivated by goals. I have learned that when I have an event to train for, I am more motivated to work out so that I don’t bomb on race day. It also gives me great joy that my kids have watched me work out all of their lives and have joined sports teams and been athletic because of my example. When my daughter was in Middle School, she came home bragging that she got to demonstrate burpees in her P.E. class at school, adding, "mom, the kids weren't going all the way down to the floor!" She has also introduced the birthday burpee tradition to her Cross Country team. My son also shares his lifting benchmarks with me, "hoping to be stronger than my mom someday." I think the earlier we start getting children interested in sports and exercise, the healthier they will be for the rest of their lives.